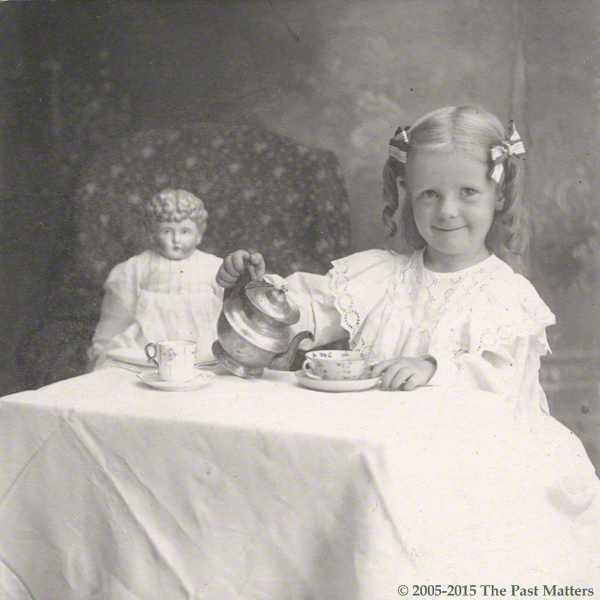 Purchased several years apart from different sellers on eBay, these two photographs give no indication of the photographer name or location. However, the staging and lighting strongly suggest they were taken by a professional photographer. The tea party setting, with its crisp linen tablecloth, silver teapot and bone china cups and saucers, is unusual. That the little girl is smiling in one of the photographs is downright rare.

The crisp detail and olive-black tones of these images indicate they are matte collodion prints. These prints, with their wide range of black and white tones, first appeared in the mid-1890s.1 The size of this photograph provides additional evidence for a late 1890s or early 1900s date. These cards are larger than the cabinet cards that were popular in the 1880s and 1890s and at 5×7 inches are one of several alternate-size card photographs that first appear in the mid- to late-1890s.2

Identifying Dana and her Doll

The distinctive hairstyle of Dana’s china doll identifies it as a “low-brow” china, and dolls with this hairstyle first appeared in the 1890s.3 Manufactured by C.F. Kling & Co., this one is model no. 220, a common doll that would have been readily affordable by a middle-class family.4 German low-brow china dolls were exported in large numbers and remained popular until World War I, when many of the German doll factories drastically curtailed production or shut down altogether. The doll’s blonde hair provides evidence that this particular Kling 220 doll was manufactured after 1900 because prior to 1900, nearly all china dolls had black hair.5

Analysis of the photograph’s size and print type, combined with identification of the doll, establish an earliest-possible date of the mid-1890s for the photograph. The young girl’s dress, which is made of white cotton batiste with an open-neck yoke, bishop sleeves and an embroidered and perforated bertha collar, helps to provide a book end for the date range. This silhouette appeared at the end of the 1890s, was popular between 1900 and 1905, and would have been noticeably out of style by 1910.6

The original photo purchased on eBay is only inscribed with the name “Dana Williams” on the back. The second photo, purchased several years later, is inscribed “Dana Margaret Williams” on the back and underneath the name is written “4 yr 7 mth 18 day old.” The addition of her age also provides evidence that Dana Williams is the subject of the photo.7

Two photographs of Dana Margaret Williams taking tea with her Kling china doll at the age of 4 years, 7 months and 18 days. The photographs are matte collodion prints on 5 x 7 inch dark green cards. The photographer and location are unknown. Click on an image to start slideshow.

Which Dana Williams is She?

A search of the 1900 and 1910 U.S. censuses for children named Dana Williams turns up several children with that name, but only one with the middle initial of “M.” Born on 15 December 1896, Dana M. Williams would have been 4 years, 7 months and 18 days old on 2 August 1901, providing a possible date for these photos consistent with the date range identified above.8 This Dana M. Williams was born 15 December 1896 in Percival, Fremont, Iowa, and died 19 January 1977, probably in Ontario, San Bernardino, California.9
This Dana M. Williams is also included in an Ancestry.com Member Family Tree, which states her full name as Dana Margaret Williams, but provides no source for her middle name. This Member Family Tree includes photographs of Dana M. Williams, and one those photos is included here.10

The marked resemblance between the adult Dana M. Williams and the young Dana Margaret Williams in the eBay photographs provides additional support for the conclusion that they are probably the same person. This means the photographs were most likely taken in Fremont County, Iowa or Coffey County, Kansas, based on evidence that shows Dana Williams and her family moved from Iowa to Kansas between 1900 and 1905.11

Children with Toys and Bears

Children with Cloth and Paper Dolls

This site uses Akismet to reduce spam. Learn how your comment data is processed.

Get New Posts by Email